Thomas Jefferson and the Tripoli Pirates: The Forgotten War That Changed American History, by Brian Kilmeade and Don Yaeger. 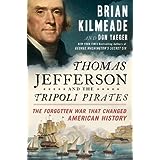 I just finished reading this fascinating book. To pique your interest, let me ask two questions:

Well, if you don’t know the answers, or even if you do, you should find this book very intriguing reading about a nearly forgotten war in American history.

America’s first war against terrorism was fought from 1801-1805 against the pirates of four Muslim nations on the Barbary Coast of North Africa: Morocco, Algiers, Tunis, and Tripoli. Although the nations were independent, as Muslim nations, each looked to the caliphate in Constantinople for spiritual leadership.

After the Revolutionary War, the newly independent nation of America was deeply in debt, and its economy badly needed to grow. It was thus very dependent on trade through its merchant shipping. But there was a serious crisis.  The Muslim nations of the Barbary Coast routinely engaged in piracy, attacking American ships and enslaving the crews, in hopes of exacting tribute from America. They prowled the Atlantic waters west of Gibraltar and the Mediterranean waters east of Gibraltar.

But there were two problems: America didn’t  have the money to pay the tribute, and also had no navy to defend its merchant ships. George Washington had disbanded the navy after the Revolutionary War, since he didn’t feel it was needed as America had no intention of getting involved in foreign wars.

Efforts by John Adams and Jefferson, as ambassadors to Britain and France respectively, to deal diplomatically with the Muslim nations were ineffective, as the Muslims believed their religion entitled them to plunder and enslave non-Muslims. It was all quite reasonable and even “moral” to them. The richer nations such as Britain and France routinely paid monetary tribute annually to the Barbary nations to ensure that their merchant ships were left alone by the pirates, with a portion of that tribute going to the caliphate in Constantinople.  But America did not have the financial resources.

So American crews languished in slavery, unless they converted to Islam. The book deals in some detail with one ship’s captain who was in captivity for 10 years. American ships were converted to the service of the Barbary states.

So when Jefferson assumed the presidency in 1801, this was the crisis he faced. And he wisely decided to stand up to intimidation by building a navy to defend American merchant shipping, even if America had to borrow money to do so. And thus America embarked on the Tripolitan War of 1801-1805, which involved blockading the port of Tripoli, and sending US Marine ground forces in order to support a challenger to the throne of Tripoli who would support America’s right to unhindered shipping (thus the famous line in the Marine Corp hymn about “the shores of Tripoli”).

Eventually American navy brought the Barbary nations to heel, and America was free to embark on its way to eventual economic prosperity and international respect. The story of how America achieved this victory, and the numerous setbacks along the way, is the subject of this fascinating book.

By the way, I read this book on the heels of another new book added to the library, The Great War of Our Time: The CIA’s Fight Against Terrorism—from al Qa’ida to ISIS, by Michael Morell, the recently retired Deputy Director of the CIA. Another great book, which is so very timely after the recent Paris attacks.

As the author of Ecclesiastes said, there is really nothing new under the sun.